I am so pleased that I was at last night’s event as it is one of those nights that really was a special evening. With a last minute purchase of two tickets to see Newton Faulkner the night before the gig, I had proceeded to spend the whole of the next day listening to his music and getting excited about the evenings gig.

We left the house and the rain was pouring down, with thick waterproof winter coats and waterproof boots on we headed over to the beach. We parked a short walk away from the beach but by the time we had walked to the entrance of the beach and down the 133 gruelling steps we were pretty damp. We headed straight to the bar and then met our friends and were chatting, laughing and drinking whilst waiting for the evening’s entertainment.
To be honest with my hood up I didn't really notice the bad weather. Of course we would have all preferred a barmy summers evening, wearing flip flops feeling the sand between our toes and watching the sun set whilst dancing the night away but we must be realistic, we live In England! However with the rain falling there was only one way to deal with the evening and that was to get the beers in and huddle and stay dry!

As 9pm arrived so did Newton Faulkner on stage and started with a classic song from his earlier days and instantly had the crowd fixed. Song after song he was wonderful and really did get those toes tapping and everyone singing along.

Several times Newton Faulkner instigated clapping and singing and got the crowd totally absorbed in his set. He was attentive and listened to his audience and made you feel like you were at an intimate gig with friends rather than seeing a famous artist. Newton held a lot of banter between the audience, he heard a chorus of happy birthday and serenaded a young lady on her birthday. He chatted with the crowd and was constantly grateful that we had supported him through many years as a musician and again thanked us for attending. He was a complete gentleman and an utterly lovely guy.

Newton even had a few moments where if this was a talent show contest a buzzer would have gone and the song would have ground to a halt but even forgetting words to a song and playing a few out of tune notes somehow not only did he carry on fantastically he was apologetic and funny and kept practising the bit he got wrong and was simply hilarious with it and you couldn't help but love the guy and the evening.

He played his own rendition of Justin Bieber Sorry, Bohemium Rapsody by Queen and of course his epic version of Teardrop by Massive Attack plus loads of his own original new and old songs.

When I think about it everything was going against the evening being a success, forgetting lyrics, forgetting how to play and the pouring rain but somehow it was one of the best gigs I have been to and was the perfect way to spend a soggy evening with good friends and good memories on the beach in Cornwall.

Thank you Lusty Glaze for putting these gigs on and Thank you Newton Faulkner for playing and entertaining me all night.

Being a little sewing bee, making a summer dress

Every year it happens a television series appears on the box and suddenly that hobby becomes oh so cool and ever so popular. We've seen it with the Great British Bake Off where baking is the latest craze and everyone is talking cupcakes. Although I do still wonder what ever happened to fairy cakes and when they grew up and got larger and became the cool big brother cupcake?

Since the sewing bee came back onto our screens my enthusiasm for dress making has been ignited once again. Although If I'm completely and brutally honest the latest series of the Sewing Bee does seem to be a bit too clever for my level of sewing and as I watch, even myself a keen amateur sewer i'm losing interest.

I don't see myself making a lace bra or a Chinese blouse anytime soon. However I still have the book from the first series of the sewing bee that includes basic garments and easier patterns and in particular some lovely summer dresses. As I have some gorgeous materials currently at home in my sewing box I decided to make a summer dress out of this AMAZING rubber duck material.
As the summer is now in full swing I decided to make the summer dress and started by printing out the pattern rather than try to draw it out myself. This was a time consuming job all on its own and consisted of printing out 32 A4 pieces of paper, cutting them all down to size and sticking them together took ages and then once fixed into a pattern it was time to cut all the pattern pieces out.

With all my pattern pieces cut out of paper it was time to pin these to the material and start cutting the dress pieces. I decided to go for the next size up to what I normally wear to give myself a bit of wiggle room and material to take in rather than cut it too small and be stuck. However now that it is placed on the mannequin it looks worryingly small for me, but I will persevere.


With all the pattern pieces cut out it's time to start sewing my new dress together.
The front and back bodice has been pinned, tacked and sewn and the centre panel and skirt are pinned in place on the mannequin ready for sewing.

Check in with my blog in the next few days to see how my new rubber duck pattern dress comes out. For now it's off to bed. x
Posted by Amanda at 21:00 No comments:

Email ThisBlogThis!Share to TwitterShare to FacebookShare to Pinterest
Labels: Sewing

Wadebridge to Padstow bike ride on the camel trail

At the moment I appear to be living it quite possibly the best place in the UK, the weather has been stunning for weeks now. I am hearing on the radio and on the news that there has been terrible flooding in London, thunderstorms in Ireland and very chilly temperatures across the majority of the east of England. However in the south west we are being blessed with day after day of glorious warm sunshine and I am making the most of it.

After a long day stuck in the office, as soon as I finished work on Friday we loaded up our bikes into the van and headed a few miles up the road to Wadebridge to spend an evening cycling in the Cornish sunshine.
I feel so incredibly lucky to have such an amazing cycle route just a few miles from my house a route that spans a total length of 18.2 miles all completely off roads and winding its way from the coast of Padstow along the river camel to Wadebridge, up to Bodmin and then on up to Wenfordbridge and the end of the trail.

After a long day at work it was the perfect summers evening to cycle from Wadebridge to Padstow and back. It's a completely flat trail and this meant that I was able to utilise my completely useless but ever so cool cruiser. Buying a bike in Cornwall that has no gears and can only be used on the flat is quite possibly a complete waste of money however the camel trail is the perfect place to use a bike like this.

Within about 30 minutes we had cycled the 5 miles from Wadebridge to Padstow and were in the bustling harbour. We grabbed a chippy tea and a beer and sat on the harbour wall watching the ferry boat chug to and from Padstow to Rock across the river. Padstow is so beautiful if not perhaps a little spoilt by being so busy but we found a nice quiet spot and enjoyed the evening. 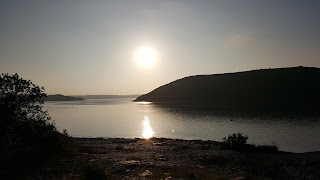 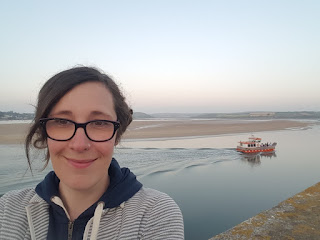 As night began to fall we headed back to the trail to cycle back to Wadebridge and then home. However we were slightly drawn to the ice cream parlour and had to stop for a bit of dessert to fuel the cycle back. Although by the time the ice cream was consumed and we were back in the saddle of our bikes the evening was definitely drawing in and the light was fading fast.
We cycled back just as it was getting a bit too dark and arrived back into Wadebridge at twenty past ten at night!!!! How amazing is that! night time cycling.

We had an absolutely gorgeous night out, chippy tea, beer and ice cream but felt ever so slightly less guilty about consuming all this naughty food as the ten mile bike ride to get it cancelled it out... plus calories don't count on a Friday, do they?
Posted by Amanda at 10:01 No comments: