When I heard on the news last year that there were two baby twin panda bears born in a zoo in Austria, it was pretty safe to say we were planning a trip to Vienna!
Although even the best made plans sometimes don't go quite as straight forward as we would like and a month after the announcement of the birth of the baby pandas, sadly my father passed away.

One minute we were planning trips to Austria to visit the Christmas markets and see the pandas the next we were suddenly planning my dads funeral! Things could not have been more different!

As the new year started we decided that we should not miss out on the trip of a lifetime and that my dad knew how much I loved those damn black and white bears and he would have wanted me to go, so me and the boyfriend re-planned our trip to the Austrian capital.

With our five day mini break in Vienna well underway we had squeezed in loads of tourist attractions including a river cruise on the Danube river, Eating strudel in the tallest building in Vienna, Taking a trip on one of the oldest wooden Ferris wheels and experiencing architecture Austrian style! But the best was yet to come. THE ZOO, The Tiergarten Schonbrunn and seeing the two baby pandas.

We arrived in Vienna late on the Monday and decided to use the Tuesday to find our way around the city and get used to the local area. On Wednesday we had decided I couldn't wait any longer and I couldn't bear the fact that there were two baby pandas less than a mile from our hotel and we still hadn't seen them.

We got up early.... Well I woke up early, too excited to sleep and dragged my other half down to breakfast and we were soon on our way out of the hotel and on the mile walk to the zoo. Except we were following my boyfriends satnav on his phone and unfortunately he isn't the best at navigating and when we left the hotel the phone said we were a 20 minute walk away. When I started getting in a hissy fit that we we're wasting valuable panda time, I checked the phone and we worked out that we were now 50 minutes away and had been walking in the wrong direction for half and hour!!!!!

After an hour and a half of walking we could see the entrance to the zoo and I was unable to contain my excitement. We arrived at the zoo and it was really quiet.
I'm quite good at savouring any moment but with this I couldn't wait any longer and we headed immediately to the panda enclosure. Luckily the panda's are really near to the zoo entrance!

Slight anti climax! Both baby pandas were asleep in their sleeping tree and the mummy bear was chilling at the back of the cage, back to us, just sitting there. After 20 minutes of sitting waiting and not a glimpse of the baby pandas we decided to leave the enclosure and visit the rest of the animals in the zoo.

After about an hour of blankly looking at other animals I insisted we headed back to check what the pandas were doing..... they were doing the same! No sight of the two twin babies and mum just sitting yet again!!

We went around some more of the zoo and saw more of the animals and took shelter in a monkey enclosure viewing area to try and get warm, as outside it really was bitterly cold being out all day. We saw some people eating some random garlic circle things and the smell was intoxicating and we had to get in on the action and get some for ourselves. Deep fried flat breads smothered in garlic butter, well no one is healthy on holiday are they!!!!
We visited indoor gardens and tropical zones including the freakiest area with bats flying freely in a dark tunnel that you have to walk through and we saw koala bears, polar bears, elephants the aquarium. 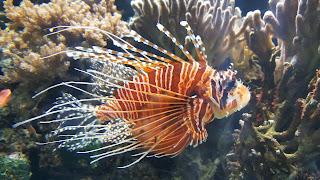 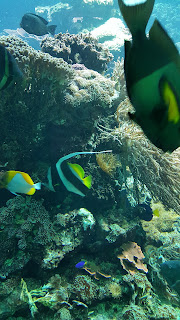 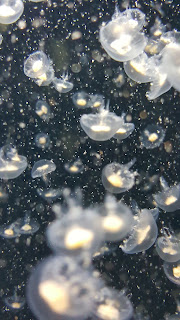 It really is a very good zoo but we just had to get back to see if those little pandas were going to make an appearance and finally, after popping back to the enclosure several times on that last visit about an hour before closing time the mummy bear was parading around the enclosure. Sitting right up at the glass and eating bamboo and one of the babies was sitting in a tree. We did get a brief glimpse of the other twin baby panda but this one was shy and hid in the sleeping tree most of our visit. 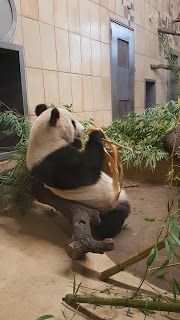 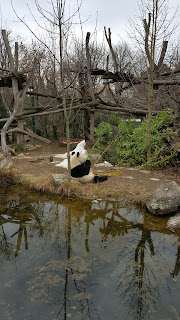 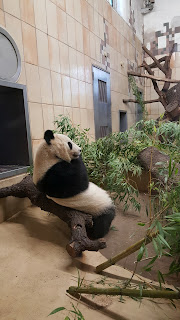 As the baby panda entertained us nearly falling out of the tree all the visitors at the zoo were now in the enclosure cooing and whooping at the little bear.
It really was the most amazing experience to see such a cute little panda.
With only about 30 minutes left until the zoo was to close I wanted to visit the zoo shop and get my fix of panda based souvenirs. We decided to wave a farewell to the gorgeous bears and make our way to the zoo shop and as we were about to leave my fella announced that 'We couldn't leave yet' I kinda turned and scowled at him! Er, why not, I don't want to miss the zoo shop!!! He replied 'Because there's something I haven't asked you yet'
And there it was!!! A WEDDING PROPOSAL IN THE PANDA ENCLOSURE!!!

I don't think I could quite believe it, we had been together nearly 9 years and I had pestered constantly that I wanted to be married by the time I was 30 and as this had been and gone I thought it would never happen.
In a state of shock I of course replied a teary and shocked 'yes' but then proceeded to insist that we visited the zoo shop!!! HA HA HA I think this was mainly due to shock of the proposal...... OK, I admit It I really did want that soft cuddly panda from the shop.

Even now several months on and well into wedding planning I still can't quite believe that my fella had purchased a ring without me knowing, had got it through the airport without me knowing and had planned a proposal with my favourite animal in the whole world. 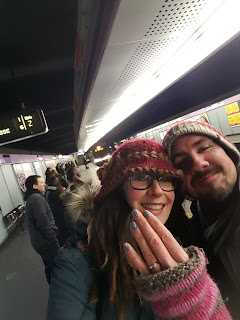 I really am the happiest girl alive!
Posted by Amanda at 10:50

Email ThisBlogThis!Share to TwitterShare to FacebookShare to Pinterest
Labels: Travel