After reading a fellow Newquay Road Runners blog post about their journey from running their first half marathon to full marathon including moving to Cornwall during this journey I felt inspired to write about my story into running.

When I was at school I loved running, I loved sports day and I certainly had that competitive edge. I was part of the hockey team and basketball team, as well as the athletics team and outside of school I was a member at the Melbourne Athletics Club in Chelmsford, Essex and regularly used to compete in the 800 Metres, 1500 Metres and the cross country.

But at the age of 15 I became less and less interested in competing and missed more and more training sessions and found new hobbies in boys, drinking and going out. By the age of 21 I had had enough of growing up in Essex and my life had lost a lot of direction. I used to dable in a little swimming before work and often cycled to work but other than that I wasn't very active. At the age of 21, I decided that what was the point in living somewhere that you didn't particularly like and what was there to stop me moving somewhere else?

Just weeks after my 21st birthday my plan was made and I was off to Newquay. The coast of dreams, I was going to live by the beach and be happy ever after away from the city life I hated so much in Essex.

Things went fantastically well, I landed a job in a holiday park behind the bar, found a place to live and started to make friends and begain my new life in Cornwall. Over the years I moved from place to place and from job to job. I joined a ladies surf club and really was living the dream. However fast forward several years of living in Cornwall I was invited to attend my first Park Run event with my sister.

Now to give you a little more background, my sister wasn't in any of the sports clubs at school and certainly didn't go to after school athletics clubs. So for her to invite me to a running event I felt that I couldn't say no. Deep down I was thrilled to be running again, although the realisation that I no longer had suitable running shoes and barely owned enough gym clothes to take part in a run was a slight issue. I hadn't exercised for ages and was certainly very, very unfit.

With a seriously old and squashed pair of very warn trainers and some old skool Addidas three stripe trousers I was on the start line with my sister and taking part in my first bit of running for nearly 15 years.

The event started fast and everyone disappeared off around the course and I don't think it had even been a mile before I had to walk a section. With another flat section I tried another little run but then another hill and I was walking once more. With a combination of walking and running I managed to get around the 5km course. Although I struggled the whole way around I enjoyed it and I really wanted to attend again.

The following week, this time with a pair of newly acquired running leggings I was back on that start line taking part in my second Park Run event and I loved it even more than the first week. People were friendly and encouraging and getting a faster time then the week before fuelled my desire to go again and again.

That was just 12 months ago and now exactly one year on I have not only attended 24 Park Run events. I have also joined the Newquay Road Runners club and competed in two races for the club including the Cubert 5 and the Falmouth 5 Mile Mob Match. But the  biggest highlight of the last 12 months was reaching the age of 30 and signing up to my first half marathon, which I completed in October. 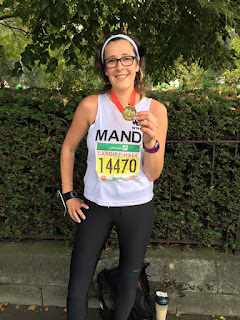 I now try to run every Tuesday night at the intro to running night put on by the Newquay Road Runners as well as attend Park Run on a Saturday. I might not be running very fast or very far but I am loving being a runner again and can't believe what I have achieved in the past 12 months.

I can also confirm that in the 12 months since I started running I am the proud new owner of several new pairs of swanky running shoes and the old trainers and Addidas three stripes will never be seen out in public again! I have made loads of friends since that first Park Run and personally achieved so much and I can't wait to see what my rekindled love for running will give to me next year.

Here's to 2016 and hopefully another great year of running.
Posted by Amanda at 17:58