My journey into running my first half marathon now in jeopardy

Having started running in December everything was going well, I was enjoying getting fitter, faster and doing further distances than ever.

I had joined the local Newquay Road Runners group as well as regularly attending Park Run as well as doing a few runs on my own during the week. Everything was going well I was entering races and really thriving and enjoying my running.

I had managed to go from couch potato to regularly running up to 5 miles 3 times a week and even managed a top distance of 8 miles. I might have been a bit slow but I was loving it and so decided to enter my first ever half marathon. Maybe I was a little optimistic to go from complete beginner to a half marathon in less than 12 months but I really wanted to do it, and especially as I was doing it to raise money for the WWF.

However, things took a turn for the worse whilst running and I found myself in a lot of pain in my calf. However this was during a Park Run event and I didn't want to stop and I kept running through the pain and didn't think much of it. My calf was stiff the next day and the day after but then it felt ok, so I went running again. This time everything felt fine whilst running but for the following two days walking was painful and my calf was incredibly tight. Getting out of bed the morning after my runs was becoming excruciating but as the day went on everything eased and the same process was gone through.

I continued to run and suffer the next few days and decided that with my half marathon looming in October I decided that I should probably get my injury looked at rather than continue to push on with an injury.

Attending a local physio in Newquay I was told that there was a lot of knotting in my calf and this was worked on and although it made the pain flare up I was hopeful that with my armour of exercises and stretches I would be soon back running. But as the weeks have passed the injury is still lingering. I've left the physiotherapist scratching his head as to what is causing the pain and gone through a process of stretches, massages and exercises and still the calf is niggling.

I'm now wearing compression socks full time, even through the night and have started yoga as well as seen a chiropractor and had acupuncture and although there is less pain and things are feeling much better the niggle is still in there and my calf still tight and tender especially after a walk. (No major hiking expeditions but a noticeable twinge after a walk through the local town and I'm still yet to attempt running)

I'm now starting to worry that this injury isn't going to clear in time to start training and attend my first ever half marathon and now need to make the decision whether I will need to defer my place or not.

I'm feeling deflated and pretty gutted that things aren't going as I want them to and that there's even now mentions of scans and x-rays on my calf to find out what's going on. I'm trying to keep optimistic and keeping my fingers and toes crossed that after 6 weeks with absolutely no running and hundreds of pounds spent on private treatment that I will not only be back running but also be able to complete my half marathon and raise money for WWF.

Fingers toes and panda paws crossed that I will be back running soon..... but for now it's compression socks and slippers time!!! 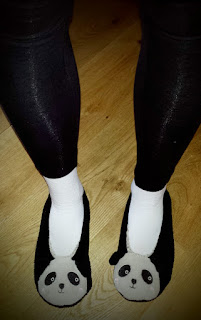