Park Run number 19 for me, getting slower, walking and struggling on through.

This weekend saw me attend my 19th Park Run at Lanhydrock National Trust Estate near Bodmin in Cornwall and It wasn't one of my best. It wasn't horrendous and I wasn't the slowest but for myself I am annoyed. 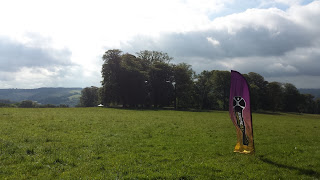 Having started Park Run back in December and this really was my first introduction back into running for many years. I plodded, jogged and walked around the course in a respectable time of 35 minutes and 48 seconds and for a very gruelling 5km run with a large amount of up hill sections I was really pleased.

Move forwards 6 months and I've joined the local Newquay Road Runners group and I run with them most Tuesdays, I've entered two races now both 5 miles in distance. The first being the Wadebridge to Padstow 5 mile event for the lobster hatchery and the second being the much more serious Cubert 5 mile event. I have then decided to enter my first ever half marathon in October this year! From a complete couch potato to 10 months into my running, I'm going to attempt to run 13.1 miles!

My weekly visits to the road runners group and the weekly visits to Park Run help to push me to gain faster times, better fitness and push and compete a little against the other runners whereas my one other run per week is a slightly longer distance and this feels good each week. But the week just gone I failed to run at all since the last weekends Park Run event. The whole week I had been feeling knackered and although I had got out on my bike and accomplished a little 6 mile bike ride I hadn't managed anything in my runner shoes.

Waking up on Saturday morning for Park Run I felt tired, even though I hadn't done anything the night before and had had a reasonably early night. I walked to the start line yawning my head off. Usually I will jog to the start line but this week a walk was all I could manage. Not wanting to give up before I had even started I said to myself 'at least i was here' I think I would have been even more grumpy had I have missed that weekly run along side all the others that week.
The race director got things underway giving an introduction to newbies and tourists and the 117 runners were on the start line and ready to go. I put some music on, LOUD in my headphones and zoned into my pace of running and tried not to get carried away with the pace of the faster runners.

I picked off a few runners at the start and overtook a few more on the fast downhill section but as soon as the terrain turned and I had to work I had nothing in me. With a stitch on my right hand side and pretty breathless I was wondering why I had run quite so fast on the downhill section? and why didn't I warm up at all?

As I approached the first of the uphill sections I began to really struggle, mainly with the stitch and the breathlessness. I didn't want to give up just yet and managed to make it up the first two up hill sections but the third which is the biggest of the three I just had to walk. I tried power walking up the hill but even that was a struggle. People started to over take me, and I was struggling to even push on and walk up this horrible hill. A few regular Park Runners cheered me on and said well done to encourage me but I was already annoyed with myself. I had nothing in me at all, no amount of encouragement would get me through, I felt like I was running on empty.

At the top of the steep hill I turned onto the field which although Is still uphill it is very much more gradual and feels a lot less gruelling and managed to run across this but as the field reaches the woods and the steepness of the hill increased, yet again I was walking.

As I reached the gate I was getting over taken by even more people and I knew that this was the last section, it was a little bit more uphill before the downhill to the finish. I started to jog again and tried to keep up with the ladies that were in front of me. To little avail I couldn't keep up at all, I managed to maintain a steady ish (slow) jog up the hill and as the two ladies in front of me took off down the hill to the finish I was doing well to manage to keep my legs going one in front of the other and not collapse.

As I reached the finish line, I struggled for breath to muster the words to thank the volunteer for my finishing token. After a few minutes I had recovered enough to get my bar code scanned in and start the walk back up the hill I had just come down back to the car park.

I was utterly and thoroughly shattered and now I had to get my bum over to the Electric Beach Festival and dance my socks of for the rest of the day!!!
Already I'm thinking about the next one and hoping for a better time.... Park Run is addictive but I guess there are a lot worse things to be addicted to in life than exercise! 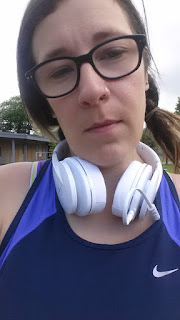