When Electric Beach first made a name for itself I have been in attendance and this weekends festival was to be no different. Starting in 2013 at Watergate Bay with the likes of The Next Men and Del La Soul playing this one day festival was an interesting night.

When the festival first began it had teething problems from running out of beer and many unpaid guests watching the festival for free from the beach and the cliff top. 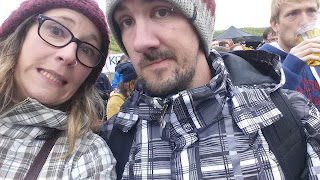 The following year things improved at Watergate with Electric Beach 2014 with the stage swinging it's direction around to face out to sea and the alcohol flowing a lot more freely all evening and they certainly did not run out.

Move on three years from their humble beginnings and we welcome the 2015 Electric Beach festival and what can I say. They have learnt so much from the early days and made sure that the intimate festival is a success. Not only has the festival moved from Watergate Bay to Fistral Beach the whole event seemed a lot more successful. For example you didn't have to leave the festival walk back across the beach and up into the car park to use the porta loo's like you did at Watergate.

This year they also had the alcohol choices bang on. With local beer Korev, and local cider Rattler on offer and this year they didn't run out! Although the queues for the beer tent by the end of the evening were a bit of a nightmare and we chose not to bother with getting a drink as the queues folded out threefold and reached the coffee camper van!! For anyone at the festival will know how long the queue was! Now I don't want to be negative about the festival at all but it did feel smaller than when held at Watergate or maybe it was just more successful and their were more people there?

I had weekend tickets but sadly with the severe weather warnings and an afternoon of torrential rain on Friday I decided to not venture out of the house and go over to the festival even though I had tickets. I wonder how many others gave the Friday night a miss due to the weather and I really do hope that the event organisers didn't loose out too much.

I understand that Electric Beach is a new venture and the first year it was simply a one day festival and the second year it moved to a weekend two day festival which was great. However this year although they kept things to a two day festival this year the event was held over the Friday and Saturday and being at work on a Friday until 5pm meant that I had missed most of the day whilst working so the choice to miss the few evening acts wasn't so bad especially as I have seen most of them before. 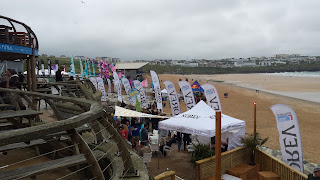 When Saturday arrived I was excited as the weather felt warm and the sun was breaking through the clouds. It wasn't even 10am and the temperature in my car was reading a balmy seventeen degrees. However this wasn't going to last and was certainly a totally different story by the afternoon at Fistral Beach. 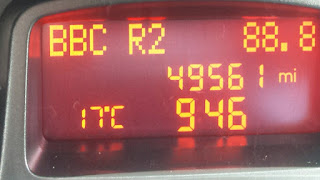 We arrived at the beach to really strong, cold winds and typical Cornish drizzly. The first band we saw were the Big Sets who as always were amazing playing their funky soul and blues music.

The music just kept on coming with bands like the Renegade Brass Band, Backbeat Soundsystem and even the mighty Dreadzone. The wet weather was made bareable by the amazing people from Korev beer supplying us with knitted hats and ponchos to keep warm and dry before the highlight of the evening with the wonderful Cat Empire. 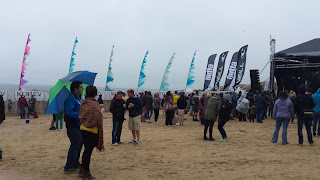 The festival was amazing this year, much much better booze on offer and some really great bands I'm just not sure whether the Friday/Saturday combo worked as well as the previous years Saturday/Sunday festival but only time will tell and fingers are well and truly crossed that the organisers had a successful festival and will be putting on something bigger and better for next year. 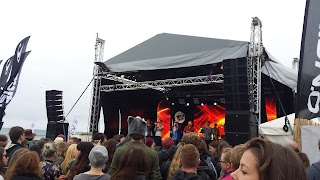 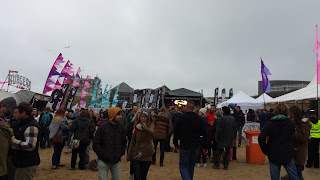 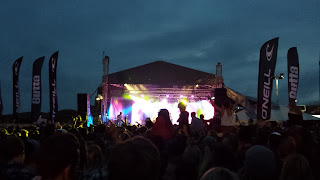 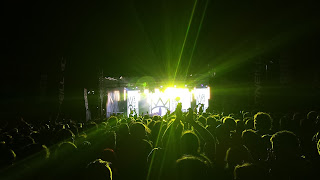 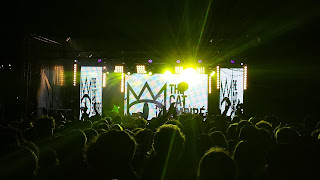 Thank you for a great weekend Electric Beach.
Posted by Amanda at 10:00