After a week sunning myself in Portugal and doing a great deal of relaxing by the pool in the sun and drinking lots of local beer, getting back into my running seemed incredibly hard.

My first after work run of just 4 miles was a real challenge and for the first time since I started running I had to walk sections of a route that I've managed to run several times without walking before. The worry really started to hit me that day whilst struggling to get around a four mile route.

I had just entered my first half marathon and although I have 5 months to train I was struggling really badly to complete just 4 miles!

Trying to not get too deflated the following week after another Park Run session and another running club I went to attempt a 5 mile run. I didn't want to be beaten by that days 4 mile disaster so decided to increase the distance but chose a much flatter run that I felt more confident that I could achieve without getting down hearted. I chose to run in the city of Truro and ran a route along the river to Malpas and back. It was beautiful and I didn't struggle.

With the confidence of my run in Truro I decided that with a bank holiday Monday looming it would be the perfect day to attempt a longer run again. As I was beginning to feel fitter I decided to attempt another 8 mile run and again I chose a route that was relatively flat this time following the river Camel out towards Wadebridge. The great thing about Cornwall is that there are loads of options, flat river runs, beach runs and coastpaths or diserted country lanes.

I first ran 5 miles of this Camel trail route back in March as part of an organised run for the National Lobster Hatchery in Padstow and it really is beautiful so increasing the distance to 8 miles was something that I really wanted to achieve.

The Camel trail was really busy with cyclists, dog walkers and other runners so I had plenty of people around me to keep me going and avoided any walking. I'm really pleased that I have now run the distance of 8 miles twice. Next challenge is to run those 8 miles on a more undulating course as well as increase the distance again.Hopefully the next time i'm on the Camel Trail I'll manage to run all the way to Padstow and back and get my running up into double figure distances. 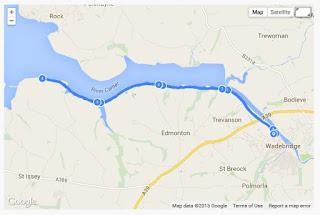 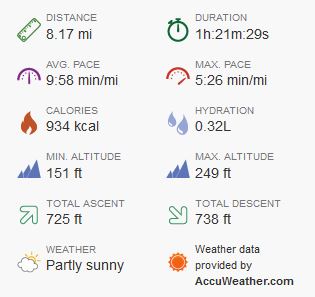