Running in the Cubert 5

At the six month mark of starting running it was time to enter my second proper race, The Cubert 5.

On Tuesday night I entered the Cubert 5 mile road race alongside some of my fellow intro to running friends. I had recently completed the Wadebridge to Padstow fun run which was also a 5 mile run but the emphasis on this previous run was that it was a fun run and it was for charity.

However Tuesday night was a much more serious affair. Putting on my crisp new Newquay vest, this would be my first event also associated with a club. 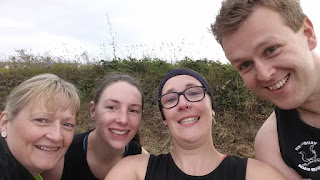 Lining up at the start of the race the streets were filled with proffessional looking runners from clubs all across cornwall. There were runners from clubs including Bodmin, Hayle, St Austall and even Saltash. This was shaping up to be a serious event, people warming up, stretching and preparing to run a very fast 5 mile race.

I however, with some of my intro2running buddies were huddling nearer the back of the pack. Not wishing to get in the way of any of the fast elite runners and not wanting to be continuously overtaken we started off to what we believed to be a nice steady pace. 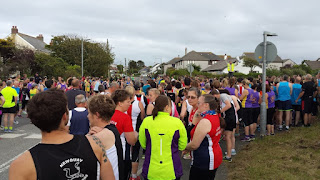 I usually run at around the 10 minute mile pace but with the excitement of the crowds of people I had started off a lot faster. The course went off in a square out of the village of Cubert out into the countryside and back to the village. It did this twice and the support around each loop was fantastic. As my first race for the Newquay Road Runners the support was just epic!!

At every turn you would hear someone shouting and cheering you on and this really helped to get around the course. Arriving at the finish line I was really pleased to have gained a time just over 45 minutes and had completed the course with an average of 9:04 minutes a mile, quite possibly one of my quickest runs yet! 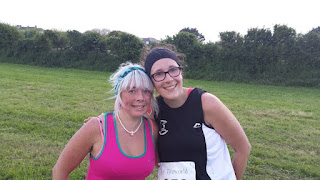 I had an awesome time at Tuesdays race and it all helps to fuel my passion to run again after dropping out of the running scene for over fifteen years.

If there is one slight negative of Tuesday nights experience, that is that I felt shattered plodding around the 5 mile course and the dread is really starting to sink in about having signed up to run a half marathon. At the moment I'm still running relatively for leisure, I attend the Tuesday night intro2running and attend a weekly ParkRun event but both of these evenings are between 3-5 miles of running and no where near the double figure distance that I will be running in October.

I know that I will soon need to up the pace and increase the distance but until July hits and I reach the three months prior mark I think I will stick to running for leisure and then really start the training next month.

If you would like to sponsor me to complete this epic mission of attending my first ever Half Marathon then you can using the Just Giving link at the top right on my blog. https://www.justgiving.com/Amanda-Panda/

Thank you and wish me luck!