Would you swim in a sea full of Poo?

Would you swim in a sea full of Poo? The answer to this question, to anyone anywhere in the world, would answer a resounding NO! But that's exactly what happened yesterday and this isn't a new occurrence.

For the last year or more I have subscribed to the sewage alert service provided by Surfers against Sewage using their AP, I get messages when sewage is discharging at my local beaches and this is surprising often. I remember a few years ago my family were down and all went in the sea at Mawgan Porth on the last day of their holiday. They phoned me on the way home to Essex the next day saying that they had had a terrible drive home as all had upset stomachs and couldn't work out why. I said to them how I never go in the sea after heavy rain and explained the surface water run off from local farms and the sewage over flow outlets and how this gets in the water and makes it polluted. They said that it was raining and stopped but wanted to go in the sea as was the last day of their holiday. At first they didn't believe me when I told them and couldn't understand how similar beaches with blue flag status can get affected like this. Now that I have the AP on my mobile phone I am shocked at just how many times the alerts go off. Gwithian, Crantock and Fistral all seem to get alerts after even the slightest rainfall.

However yesterdays raw sewage release straight into the sea made headline news on the BBC and with the powers of social media images of the raw sewage turning waters brown quickly filtered into everybody's news feeds. On an otherwise sunny weekend the beach at Gwithian was red flagged by the RNLI and everyone ordered out of the water. To add to the torment of the beach getting closed there was also a surf competition being held at the beach which had to be postponed. It seams absolutely crazy that the water companies are allowed to emit raw sewage straight into the ocean on any parts of the coast. As a resident in Cornwall I am fully aware of the costs that we pay for water in the county and know these are amongst some of the highest in the UK, but also sadly aware of the profits that these companies make each year yet still they are allowed to pollute the beaches that bring so much tourism to the county. 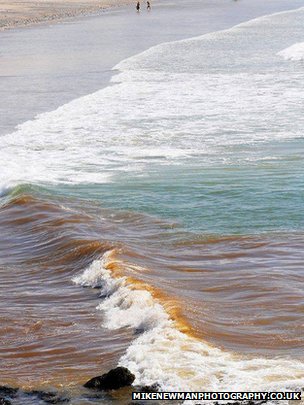 As a regular beach goer I now always have the alerts firing from the wonderful work that Surfers against sewage do and can avoid catching any nasty bugs and often visit beaches where there are no alerts but on arrival seeing a brown layer on the tide line decide otherwise but for tourism that Cornwall so heavily needs a lot of people won't know about the problems of sewage being released straight onto the beaches.

There is a lot that needs to be done to stop raw sewage being released straight onto our beaches but to protect yourself from getting sick you can use the Surfers against sewage AP to tell you in real time what is happening and hopefully avoid entering the sea when sewage is being released. Although this doesn't help if your already in the water but it's a brilliant service from SAS. Surfers against sewage are a charity and a charity that is close to my heart, In the past I have volunteered my time to help at a festival in Plymouth as well as donated my time to take part in several local beach cleans. What has happened has been picked up by the mainstream media and this has been a brilliant thing as it highlights the troubles that the team at Surfers against sewage work so hard to protect. It also highlights the problem to many that haven't heard about it so hopefully this will challenge the water companies to invest more of their profits into protecting our beaches.

In the mean time, whilst sewage is still released onto our beaches please help support the guys at Surfers against sewage as they really are doing a fantastic job to get water users safe when this events do unfortunately happen.
Posted by Amanda at 21:35

Email ThisBlogThis!Share to TwitterShare to FacebookShare to Pinterest
Labels: cornwall