After 8 weeks off running and rather a lot of pain my last course of acupuncture and ultrasound seems to have helped. Not wanting to run before I can walk I decided that I would start the week with a walk and see how things went.

On Tuesday I took to the local streets and managed to walk just over 4 miles fairly trouble free. When I say fairly, I managed to walk nearly all four miles without a twinge or a hint of pain however around three and a half miles in I started to get a twinging in the muscle in my calf. But after a change of pace, the pain completely went? I'm not sure what is causing the pain and whether I will do more damage using it rather than resting it but the following day after the four mile walk there was still no pain.

With the excitement of walking 4 miles without to much bother I decided I wanted to increase the distance yet again before attempting to go for my first run in eight weeks. My next walk was along the camel trail in Wadebridge. I didn't want to start taking massive hikes up hilly coastal paths just yet and want to ease myself in fairly gently on flat routes and there isn't anywhere in Cornwall flatter than the tranquil camel trail that follows the side of the river.

Starting at Wadebridge I walked three miles up the trail before turning around and walking another three miles back. Again all was well whilst walking until I hit the four mile mark where again the same twinging started to appear in my calf. I tried changing pace but this time it didn't work. I decided to stop and give my calf a massage and carry on. The pain didn't stop completely but it didn't hurt as much and was on and off for the rest of the walk. I felt deflated that just 6 miles and I was struggling with this niggling in my calf but after reaching the car and sitting down the pain was completely gone again. 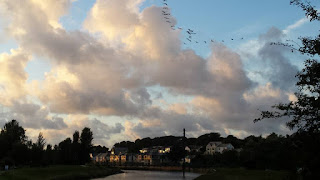 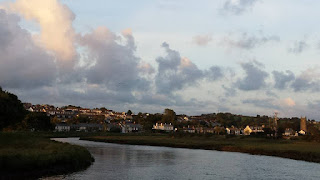 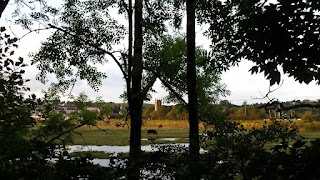 The next day when I woke up I was worried about those first few steps in the morning feeling that the calf would once again be tight and painful. However to my delight there was nothing, no pain and so I decided that after another days rest just in case I would now attempt a little walk, tiny run and little walk to ease my calf back into running.

Sunday arrived and It was time to put my leg to the test and see how it would fair with a little run and not wanting to go off to hard too soon I decided on a little route close to home. I started with a one mile walk to warm up followed by a gentle 1 mile run followed by half a mile walk to finish and I am pleased to say that I survived pain free. I was wearing my compression socks and took it really easily plus gently stretched when I got home and iced my calf for 30 minutes once home and so far so good.

The only negative is that I found running for just one mile really hard work and got out of breath VERY quickly. It seems that my 8 week absence from running has really seen my fitness deteriorate and although I've tried to keep fit with light walking, yoga and a bit of surfing there has been a lot of resting and not a lot of activity so I've now got a long way to go to be ready to run a half marathon in just 5 weeks!!!

It sounds like an impossible challenge and I thought I was going to struggle to run a half with a full training regime but I will deal with what I've got and I'd prefer to walk it than pull out so that is where I am today. Keeping my fingers and toes crossed and staying hopeful that the pain doesn't return and I'm able to carefully increase my training enough to get through the Cardiff Half.
Posted by Amanda at 20:25