Named as the Sundowner sessions the summer gigs held at Lusty Glaze beach during the summer months have been a favourite of mine since moving to Cornwall. I've watched the likes of Feeder and The Levellers and had many a good dance at the beach gigs with the sand between my toes, the waves rolling in behind and the sun setting over the sea.

However the summer of 2015 has other ideas, well to be honest there is no summer of 2015 just the empty shell of hope clinging on to the idea that maybe, just maybe we will get an Indian summer and once the kids go back to school we can enjoy some sunshine in Cornwall. To make matters worse last night there wasn't just another evening of unfavourable weather and the dread of not seeing a sunset at a sundowner session but much worse. We were on a severe weather warning for wet weather from 9pm onwards for the whole of Cornwall.

Well, what can I say! Us British folk aren't put off by a little, or rather in last nights case a lot of the wet stuff. Arriving to the beach to the sell out gig the crowds were already well fed and watered by the various BBQ and bars set up on the beach and with a lot of summer attire on display there were lots of people in flip flops and I began to wonder were people being optimistic about the forecast or did they simply not know?

After a few songs in the dry suddenly the heavens opened but it didn't seem to have an impact on the evening what so ever. Suddenly the summeresque dressed British Public pulled out pac a macs, ponchos and coats and simply just carried on as if nothing was happening. We had rain water pouring and pouring down from the sky, the water was running down in gully's onto the beach, the puddles were beginning to form but still we carried on, rain dripped off my nose and down my face I was soaked! 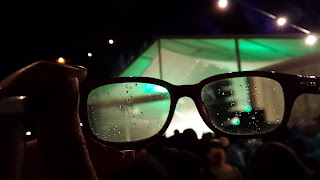 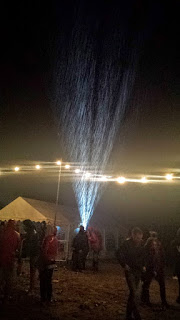 The camaraderie amongst the crowd was fantastic and not a single person was going to let a bit of rain spoil their evening and it was simply a case to drink more, dance harder and party on. 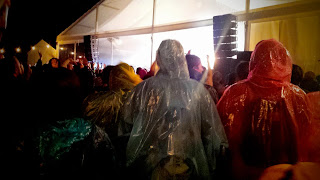 The gig continued to get better and better and the rain continued to pour and pour and friends were starting to look more and more soaked through yet not a single one of them cared. I have to say, respect to each and every person on the beach last night that proved that even in the worst of weather we still know how to have a good time and a good party.

Check out my quick video from last night with the crowd singing and dancing along despite the diabolical weather.