Well this subject i pretty much think everybody in the UK is talking about and is effecting us all and that is the recent announcement of the "possible" fuel strikes by the tanker drivers that may or may not happen and if it does it might be after Easter!

For me there are far to many if's buts and maybe's but the way the general public have reacted is pretty silly! Even after being told that there might not even be anything to worry about people still block roads queuing for hours at garages to fill up there tanks at inflated prices just in case!!!

This has had a massive knock on effect, Taxi drivers not being able to fill up their tanks and work, people being late for work due to unnecessary amounts of people buying fuel, Roads being blocked as people queue out of the forecourts and onto the main roads and all because the tanker drivers "might" go on strike, and even if they do the government has still said that they will get the army involved to deliver much needed fuel supplies so again there is nothing to worry about.

Even if there is a strike in 7 days the fuel that people are panic buying now will run out by this time next week so this will happen all over again.

That's it rant over from me for this evening, but I'm angry because i was late for work because I had to stop for petrol because my fuel light had been on for a day at best! I drive over 250 miles a week for work and won't be panic buying! I will fill up as normal and wait for all the fuss to blow over, if we have fuel we have it, if we don't we don't it's out of my hands. Panicking is the last thing i will be doing. 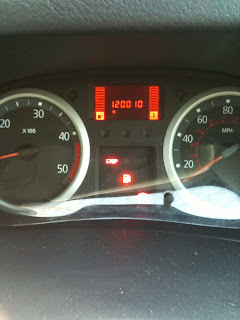 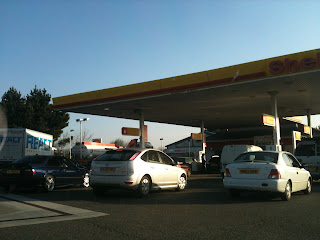 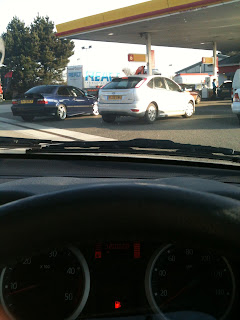 That's my fuel light on and my tank empty and why i am filling up my car like i do every fortnight! Lets just hope this has all blown over in two weeks time when i have to fill up again!