I can't actually believe it, for the first time in weeks it isn't actually raining and not only that the suns even out! Lets hope this is the way of thing to come and 2013 won't be as wet and miserable and flooded as 2012 was. Maybe if we are really lucky we might even get a snow day down here in Cornwall this year.

Wishful thinking, but it would be lovely.

Last night I spent my new years eve with friends at my old local the phoenix in Watergate bay, and I have to say it was truly one of the best new years eve parties. Whilst hitting the bar hard and nursing my way through lemsip's and appletize and barely drinking alcohol I thought to my self why had i even bothered going out when i was feeling so under the weather. But it's the biggest night out of the year and staying in and getting an early night just doesn't work on NYE.

The pub soon filled up with lots of familiar faces and lots of friends and the atmosphere was more of a house party than a pub with young and old all together enjoying the evening.

The entertainment was none other that local boys the Jeramiahs with headline act Wille and the Bandits, now for those of you that follow my blog will know that the Bandits are my favorite band, they are incredible and have such a unique hypnotic sound. I've seen the boys so many times yet i'm never disappointed  pulling new unheard songs out the bag yet again It was like seeing them for the first time. 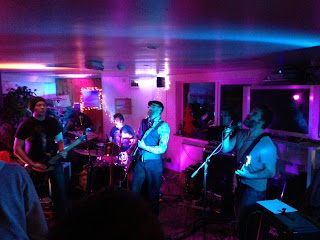 As 2012 drew to a close the Bandits jammed in a stonking electric guitar count down, with everyone in the pub hands joined we sang Auld lang syne.

I couldn't have had a better night, best friends, best music, and a walk on the beach under the stars to kick of 2013.

Happy New Year and hears to another fantastic year.
Posted by Amanda at 15:29