Waking up in our camping spot for the night near to the Zeeland Bridge  in the Netherlands we realized that it was in fact still raining. It had rained really heavily during the night but luckily for us we pack ear plugs so that we can sleep anywhere and this blocked out the sounds of the stormy weather.

With no real reason to hang about in the camping spot we got on the road straight away and headed north towards Rotterdam and up to Amsterdam. 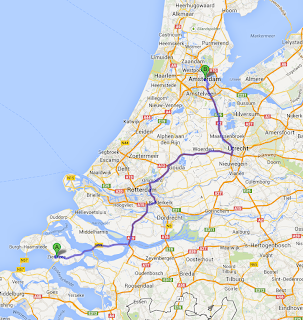 We had already researched a campsite for the next few nights located on the outskirts of the city and near to the metro station.

We successfully managed to navigate the roads in the pouring rain and found the campsite, The Gaasper Camping Amsterdam. On arrival this looked a little scary with massive metal railings around the entrance, security barriers and CCTV.

However, This did make us feel slightly safer as with such tight security on the outside did make us more at ease about leaving the van and our stuff inside. The area itself wasn't the best and seamed quite a poor area, with a footpath through a car park to the metro station. Being next to the Gaasperpark did give you the feeling that you were in fact camping in the countryside and not in a big city.

We arrived around lunchtime so decided to head straight for the metro station and into the city centre.

We got to the platform and were totally lost and there was no body around to even ask for help. The only maps of the area were of the mainland overground services so working out how to get to the city centre was a complete mission. Luckily the train pulled into the station and the train driver got off the train and walked over to us asking us where we wanted to go in very good English. He explained that we were at the end of the line and could get a train from either platform and had to change at Van Der Madeweg. He gave us a copy of a metro map and we were sorted to get to the city centre. All we had to do now was return before 8pm or we would have to figure out how to use the night bus as well!

With a map in hand it was much easier to work out where to go. On the metro we realized again that we were travelling through the part of the city that wasn't so nice, with high blocks of flats and buildings being demolished.

Arriving in the centre of Amsterdam the rain eased off enough for us to absorb the sights and work out where we wanted to go and what we wanted to see.

Not only were we lost pedestrians in a big city contending with traffic on the opposite side of the road but we also now had to avoid cars, bicycles and now trams. Coming from Cornwall and not really having to deal with much traffic and only country roads I was constantly holding my partners hand like a child to make sure I wouldn't get run over!

Another place worth visiting in Amsterdam is the floating flower markets. Even if your not really into flowers these are worth a look around as there are so many beautiful colours and smells to absorb. Opposite the flower market are more shops to peruse if buying plants is not your thing.

After several hours of walking through side streets, the red light district, canals and shops we opted to take one of the many Amsterdam boat tours. Here we got to see all the famous locations pointed out to us by the guided tour.

Here is the back of the train station and the entrance for all the free ferries across the river joining the city.

We also got to see the smallest house in Amsterdam which was only 2 metres wide. After our boat tour we headed for food and then a visit to the famous sex museum. We had to at least see one of the notorious sex museums whilst in Amsterdam.